and the Miró Quartet, 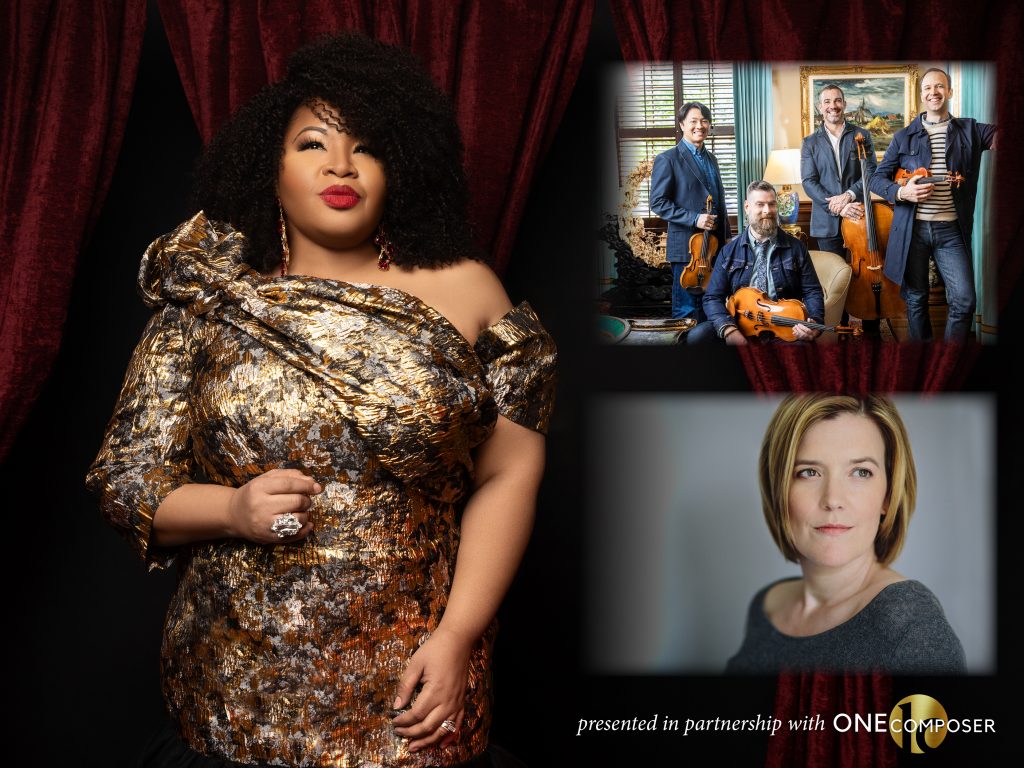 This event has concluded. Thank you to all who joined us on March 6!

The Cornell Concert Series, in partnership with ONEcomposer, presents a celebration of our country’s legacy of Black women composers in a concert that combines the incredible talents of soprano Karen Slack, the Miró Quartet, and collaborative pianist Erika Switzer. On the heels of Black History Month and in the lead-up to International Women’s Day, these artists will present arrangements of art songs, spirituals, and other works by two of the foremost Black women composers to impact the musical field: Florence Price and Margaret Bonds. The program further highlights composers who have been historically overlooked, but whose musical contributions are enduring and undeniable. This singular performance is part of a larger residency that will take place over March 4–7, organized by ONEcomposer. As part of this residency, the performers will create first ever recordings of works by the composers featured on-stage in Bailey Hall. Additionally, the musicians will work with Cornell students and the young artists of Opera Ithaca.

TERESA CARREÑO  I. Allegro from String Quartet in B minor

FLORENCE PRICE  III. Juba from String Quartet No. 2 in A minor

“Dry bones”
“Sit down servant”
“Lord, I just can’t keep from cryin'”
“You can tell the world”
“I’ll reach to heaven”

“Idolatry”
“Poéme”
“Parted”
“If You Should Go”
“A Black Pierrot”

American soprano Karen Slack has garnered international renown for her artistic versatility, charisma, and entrepreneurial endeavors, receiving critical acclaim for her dynamic and passionate performances in both lead operatic roles and on the concert stage. Hailed for possessing a voice of extraordinary beauty, a seamless legato and great dramatic depth, Ms. Slack has appeared with the Metropolitan Opera, Lyric Opera of Chicago, Washington National Opera, and San Francisco Opera. Known for her leadership and advocacy as a curator and artistic advisor, and her ground-breaking approach to engagements, Ms. Slack is a sought-after collaborator.

The Miró Quartet is one of America’s most celebrated and dedicated string quartets, having been labeled by The New Yorker as “furiously committed” and noted by the Cleveland Plain Dealer for its “exceptional tonal focus and interpretive intensity.” Formed in 1995, the Miró Quartet was awarded first prize at several national and international competitions including the Banff International String Quartet Competition and the Naumburg Chamber Music Competition. In 2005, the Quartet became the first ensemble ever to be awarded the coveted Avery Fisher Career Grant. Deeply committed to music education, the Miró Quartet has served as the quartet-in-residence at the University of Texas at Austin Sarah and Ernest Butler School of Music since 2003.

Erika Switzer is an accomplished collaborative pianist who performs regularly in major concert settings around the world, including at New York’s Weill Hall (Carnegie), Geffen Hall, Frick Collection, and Bargemusic, at the Kennedy Center, the Philadelphia Chamber Music Society, the Spoleto Festival (Charleston, SC). Her performances have been called “precise and lucid” by the New York Times, and Renaud Machart of Le Monde described her as “one of the best collaborative pianists I have ever heard; her sound is deep, her interpretation intelligent, refined, and captivating.”

ONEcomposer is a celebration of musicians whose contributions have been historically erased. By providing a platform for the study, performance, and discussion of a single, underrepresented composer’s life and legacy for the duration of an entire academic year, ONEcomposer promotes a more complete understanding of musical histories. ​Through research, lecture-recitals, performances, and guest speaking engagements with leading artists and scholars, ONEcomposer reexamines forgotten excellence, inspired by the legacy of the woman who first inspired the project, Florence B. Price.